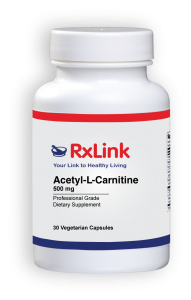 FUNCTIONS Acetyl-L-carnitine plays a key role in maintaining normal brain and nerve function during aging, as many well-designed human and animal studies have shown consistently. AcetylL-carnitine is a naturally occurring metabolite of L carnitine, and both are present in the diet, particularly in foods of animal origin.
In most tissues of the body, both L-carnitine and acetyl-L carnitine are involved in fatty acid oxidation. They are part of the so-called carnitine shuttle. L-carnitine shuttles fatty acids from the cytosol (the cell fluid) into the mitochondria (the cell’s powerhouses) for oxidation and energy production. The main end products of fatty acid oxidation are energy (in the form of NADH), and acetyl groups. Most of these acetyl groups are further oxidized in the mitochondria’s Krebs cycle, but some are needed in the cytosol for producing other important metabolites. Acetyl-L-carnitine provides a way to carry these acetyl groups through the mitochondrial membranes back out into the cytosol.
In brain and other nerve tissues, this acetyl group export by acetyl-L-carnitine out of the mitochondria into the cytosol is important in maintaining normal levels of acetyl groups for the production of acetylcholine and other acetylated neurotransmitters that are so crucial for normal brain and nerve function. The enzyme that makes acetylcholine from acetyl groups and choline is the choline acetyl transferase. The activity of this important enzyme has a tendency to decline with age, causing low acetylcholine levels which in turn are thought to contribute to the impairment of brain function that is associated with aging.
Besides maintaining normal acetylcholine levels, several studies indicate other neuroprotective benefits of acetyl-Lcarnitine, which may be due to at least three modes of action. First, acetyl-L-carnitine has been shown to maintain cellular membrane stability, and to restore agerelated membrane changes. Acetyl-L-carnitine can also act as an antioxidant, scavenging harmful superoxide radicals.
Since superoxide can damage membrane lipids, this may explain acetyl-L-carnitine’s membrane protective properties. Second, animal studies indicate that acetyl-L-carnitine preserves normal levels of nerve growth factor in brain tissue during aging. Third, human studies indicate that acetyl-Lcarnitine increases cerebral blood flow.
In summary, acetyl-L-carnitine is a naturally occurring compound that supports normal brain and nerve function during aging through various mechanisms. These include its actions on acetylcholine synthesis, membrane stability, nerve growth factor production, and cerebral blood flow.

SUGGESTED USE As a dietary supplement, adults take 1 capsule, 1 to 3 times daily between meals, or as directed by a healthcare professional. SIDE EFFECTS No adverse effects have been reported.

STORAGE Store in a cool, dry place, away from direct light. Keep out of reach of children
Acetyl-L-Carnitine 500 mg / Neuroprotection from a Potent Carnitine Metabolite

These statements have not been evaluated by the Food and Drug Administration. This product is not intended to diagnose, treat, cure, or prevent any diseases.