RxLink – Your Link to Healthy Living! 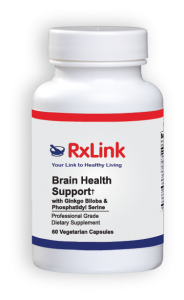 DESCRIPTION Supporting brain function becomes even more important as we age. This Brain Health Support formula is designed to support mental function and retard the cognitive decline associated with the aging process.

DESCRIPTION Supporting brain function becomes even more important as we age. This Brain Health Support formula is designed to support mental function and retard the cognitive decline associated with the aging process.

FUNCTIONS The brain is one of the most energy-consumptive organs in the body – consuming 25% of the body’s energy. It is estimated that the cerebral cortex (the largest part) is estimated to contain 15–33 billion neurons, each connected by synapses to several thousand other neurons. These neurons communicate with one another and carry signal pulses to distant parts of the brain or body targeting specific recipient cells. To support this neural activity, the brain relies on a steady stream of nutrients. These nutrients not only facilitate neuronal function but also play a structural role in the makeup of the brain itself. Compounds like the essential fatty acid, docosahexaenoic acid (DHA), and phosphatidylserine are found in high concentrations in the brain. Acetyl L-carnitine and choline provide precursors to important neurotransmitters, like acetylcholine, which facilitates memory consolidation. Inositol is included because of its role in maintaining “membrane potential,” which is the mechanism by which nerve impulses are transmitted. Brain Health Support ensures an adequate intake of these essential nutrients in a two-capsule dose. Additionally, ginkgo biloba is incorporated into the formula because of its possible effect on supporting cognitive function by modulating neurochemicals like serotonin, dopamine, and norepinephrine. The ginkgo biloba extract found in Brain Health Support is manufactured under strict quality control standards. Like all European herbal extracts, the extraction is regulated according to quality standards that exceed regulatory standards in the U.S. Along with flavoneglycosides and terpene lactones, our ginkgo provides 0.8% Ginkgolide B and other ginkgolide and bilobalide constituents.

Brain Health Support may be a useful dietary supplement for those who may not be getting adequate levels of these nutrients or wish to help support healthy cognitive function.

SUGGESTED USE Adults take 2 capsules daily at mealtime or as directed by a healthcare professional.

SIDE EFFECTS No adverse effects have been reported.

STORAGE Store in a cool, dry place, away from direct light. Keep out of reach of children.

These statements have not been evaluated by the Food and Drug Administration. This product is not intended to diagnose, treat, cure, or prevent any disease.