Your Link to Healthy Living! 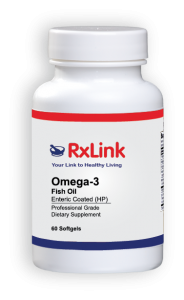 RxLink Omega-3 Fish Oil enteric-coated (HP) softgels supply significant amounts of essential omega-3 fatty acids, derived from marine lipid concentrate. Processed by molecular distillation, our formula is an excellent source of these fatty acids, providing 300 mg of eicosapentaenoic acid (EPA) and 200 mg docosahexeanoic acid (DHA) per capsule. FUNCTIONS The omega-3 fatty acid EPA is the direct precursor for the anti-inflammatory prostaglandins E1 and E3, whereas DHA is of primary importance for the structural integrity of neuronal membranes. DHA is essential for brain and visual development and is vital throughout pregnancy to support fetal brain growth and formation of the retina and visual cortex. As the most abundant fatty acid in the brain, adequate amounts of DHA are needed throughout infancy and adulthood for ongoing optimal function. Low levels of DHA may adversely influence behavior and mental performance, and have been correlated with changes in disposition, memory loss, visual, and other neurological conditions.
Studies have shown that DHA, along with EPA may play an important role in cardiovascular health. One landmark study, the GISSI-Prevenzione Trial, involved over 11,000 people who had already survived myocardial infarction. This was the first large scale trial that showed supplementation of essential fatty acids significantly lowered the risk of death, and that use of this supplement was safe. The exact reasons for such dramatic benefits with respect to heart disease remains unknown, but may be related in part to the ability of fish oil to support healthy inflammatory processes. Some researchers believe that the body’s inflammatory response to certain factors, along with a fatty diet, can increase the amount of plaque in the arteries, leading to atherosclerosis. Studies indicate that EPA and DHA can act as precursors for the anti-inflammatory prostaglandins E1 and E3, and decrease the formation of pro-inflammatory prostaglandin E2 and thromboxane A2. Scientists have also suggested that omega-3 fatty acids can have a direct cardiac effect on arrhythmogenesis. Omega-3 fatty acids may be able to modify sodium channels by binding to the channel proteins. This could then help support healthy heart rhythms.
Additionally, our Omega-3 Fish Oil is enteric-coated (HP), significantly reducing the “fishy” taste sometimes associated with marine lipid supplements.

SIDE EFFECTS No adverse effects have been reported.INDICATIONS Omega-3 Fish Oil enteric-coated (HP) softgels may be a useful dietary adjunct for individuals wishing to supplement their diets with the essential fatty acids DHA and EPA. FORMULA (WW #RxLink10313)